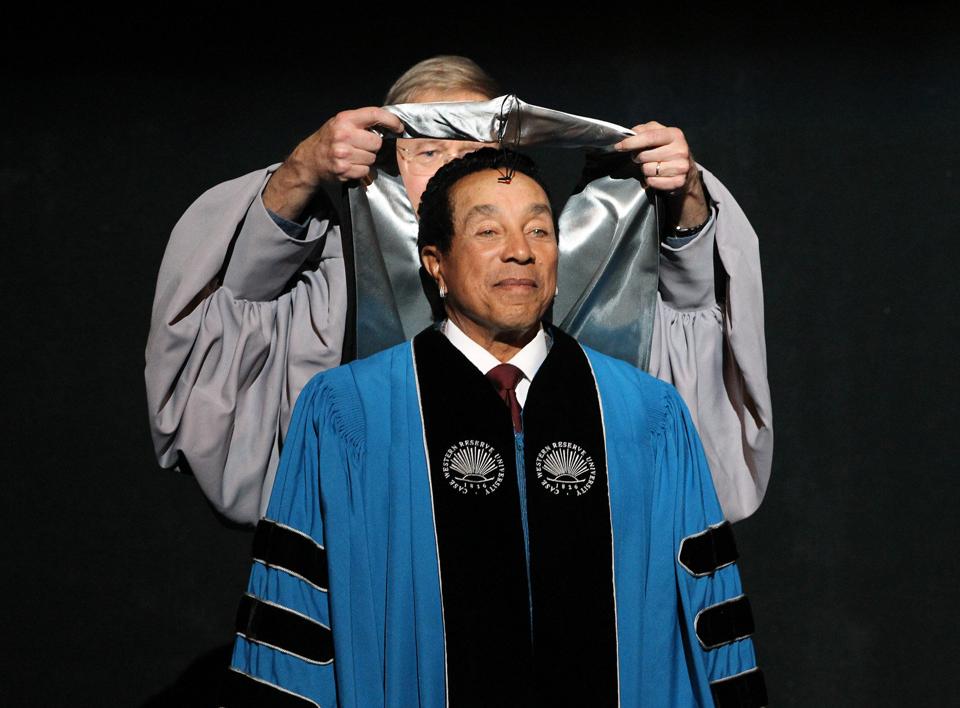 But that he was at Playhouse Square’s State Theatre was a – you’ll pardon the expression – a Miracle in and of itself. At least according to his best friend, mentor and one-time boss, Motown founder Berry Gordy Jr.

“I’ve made a lot of mistakes in my life,” Gordy told the sold-out auditorium, barely able to keep a straight face. “The biggest one was teaching Smokey Robinson how to write songs.”

Gordy advised an attentive crowd that when he began Tamla – which morphed into Motown — HE was the best at everything. Best businessman, best artist development guy and – most important – best songwriter. That was true for a while; after all, he was the principle songwriter for Robinson’s idol, Jackie Wilson, even before starting Tamla Records.

That didn’t last once the hungry Robinson started writing songs. As Gordy said, he had one for-sure policy at Motown.

Eventually, the artists in the Motown stable were vying for Robinson songs, not Gordy songs.

“I felt terrible,” Gordy deadpanned. “But I got rich.”

Gordy and a trio of Hall of Fame Motown stars – Mary Wilson of the Supremes, Martha Reeves of Martha and the Vandellas and Dennis Edwards – were joined by several contemporary artists in paying homage to Robinson and a career that began in a Detroit elementary school with his vocal band the 5 Chimes and eventually led to the his 1987 induction into the Rock and Roll Hall of Fame.

Truthfully, it was a mixed bag of performances. Cleveland’s own Avant delivered solid renditions of the Robinson-penned “Shop Around” and “Just to See Her.” But former Destiny’s Child member Michelle Williams, now a solid solo star in the gospel world, had a little difficulty until she launched into “Get Ready,” which allowed her to belt out the chorus in true tent revival fashion.

Singer and actress JoJo, in a slinky black dress cut almost up to her eyebrows, offered powerful “If You Can Want,” and Avery*Sunshine got the night’s first standing ovation with the Miracles’ hit “Cruisin’.”

Of course her humor got a starring role, too.

“I was 4 years old when ‘Crusin’ came out and I didn’t know what ‘Crusin’ was,” she said, eyebrows raised and milking the joke. “I’m 43 now and I have kids, but when the time came to ‘Cruise,’ I knew the words because of you.”

The biggest stumble, frankly, came when the Robert Glasper Experiment tried to “jazzify” Smokey songs. The beauty of the Motown sound – particularly Robinson’s songs, were the lyrics and the simplicity. Voice boxes and manipulation of sound don’t work.

But really, what mattered and what everyone in the packed auditorium was waiting for was the appearance of Reeves, Wilson and especially Edwards, who managed to recreate the spirit of Motown in just 30 short minutes. The trio breathed the same life into those Robinson tunes that they gave them decades ago and turned the songs, themselves and Robinson into legends.

Edwards in particular killed on what he called the best song ever – Robinson’s “My Girl.” And fortunately, he was able to coax his friend into breaking his promise and bursting into song as the entire cadre of singers took the stage for the finale, a reprise of “My Girl.”

Perhaps the most touching moment was Robinson, shyly but insistently, beckoning to Gordy in the wings to come out onstage. Their hug was one for the ages.

Somebody should write a song about it.